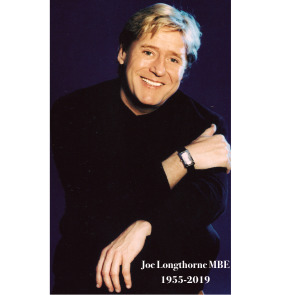 Joseph Patrick (Joe)LONGTHORNEJoseph Patrick Longthorne was born on May 31st 1955, and passed away on August 3rd 2019 at the age of 64. He leaves behind his sister Ann, brother John and husband and manager James Moran.

Joe was born in Hull to performing parents - his mother Teresa was a self taught singer, his father Fred a popular pub pianist. Joe showed an affinity for performing from a young age, participating in pub singalongs with his dad, and performing song and dance routines and various shows in the street to entertain friends and neighbours.

Joe won his first talent contest at 5 years old, utilising his skills as a singer and impressionist - a clear sign of things to come. He was a talented mimic, and combined humour with his vocal talents as a singer, gaining attention for his impersonations of singing stars.

From the age of 14, Joe had regular appearances on regional TV, appearing on ITV’s children’s talent show Junior Showtime, before his big breakthrough in 1981 in TV’s Search For A Star.

In 1983 Joe won the Club Mirror award as specialist act of the year, and in 1984 Variety Club’s Most Promising Artist award. Following this, he spent some time in the United States. On his return to the UK, his act was more polished and sophisticated, leading to regular guest appearances on various TV shows such as the Les Dennis Laughter Show.

In 1988-91, Joe hosted his own series, the Joe longthorne Show, and in 1989 made his debut appearance in the Royal Variety Performance, appearing again in 1995.

The Club Mirror declared Joe as entertainer of the year in 1990, the Royal Albert Hall was full when he performed there in 1992, and he had a 19 week season at the Blackpool Opera House in 1993, resulting in a new solo artist record being set.

Joe continued to perform in 1989 despite being diagnosed with cancer, and while receiving debilitating treatment for leukaemia. In 2005, Joe spent a month on a hospital ventilator after complications from a bone marrow transplant, even being given the last rites by a priest. However, he was back on stage 5 months later.

In 2014, Joe was diagnosed with mouth cancer, but did not let this get in the way of his tour shortly afterwards to mark his 60th birthday.

Joe was awarded the Lifetime Achievement award from the Variety Club in 2007, and a Silver Heart award in 2010 to recognise his career long support for charities. He was also appointed an MBE in the 2012 birthday honours for his services to charity.

Joe’s autobiography, Sugar in the Morning, was co-written by Chris Berry and published in 2015. During his lifetime, Joe has released 3 platinum albums.

Joe died in his home in Blackpool, in the arms of his husband of 21 years Jamie.

Funeral Details:
On Sunday 11th August at 11am, Joe's funeral procession will take him around west Hull, beginning at the Fisherman’s Bethel and ending on Hessle Road. Then after the procession at The Ryder Social Club in Coltman Street to celebrate Joe's life. On August 13, burial will take place in Layton Cemetery, Blackpool.

Notify me with new activity on this notice
Enter your email address to recieve a notification for any new activity on this notice.
Register today to set up custom notification and save notice's that are important to you.
Just notify me
Register too
Are you sure you want to turn off notifications on this notice?
Stop notifications
Keep me notified
5161 visitors. Published: 06/08/2019
Add additional content to this notice
Memorable stories and life events
You can share Joseph Patrick (Joe)'s
notice with your friends & family
One single share can go further than you think
Tributes left for Joseph Patrick (Joe)
Julie Burgess:Rest in peace Joe, a true star and a gentleman x05/01/2020

Left by Andrea Buckley:
William James Gillan:God bless you Joe I am always playing you're music, i am beginning...28/10/2019

Left by William James Gillan:
Susan Elliott:Thank you Joe for all the pleasure you have given us over t...16/08/2019
Place Tribute
See all tributes
Leave a tribute for Joseph Patrick (Joe)
Message
Photo
Candle
Finish
Register today to set up custom notification and save notice's that are important to you.
Just leave tribute
Register for free
Change notice background image
Tributes left for Joseph Patrick (Joe)
Report a tribute
Leave your own tribute
Leave Tribute
Rest in peace Joe, a true star and a gentleman x
Julie Burgess:
Comment

Left by Julie Burgess:
This candle will flicker and go out in time but his life, his songs and his talent will never be forgotten.
Once in a lifetime a true star is born and on that famous day back in hull, the world got ready for the best
of them.
I cry with the many millions of others that listen to his songs with happiness, sadness, infact with every emotion I have because I have never heard another singer to put as much feeling into a song. A great accolade for a singer.
I feel hopeless and helpless that I cant do anything to take away the heartache that I have felt since I heard the news of his passing.
I can only remember him with great love, admiration and pride (to call myself a fan of this man).
Joe will never be forgotten in Blackpool, Hull or anywhere else in the world, he touched it too deeply.

Love to all the family, God bless.

Left by From Pat:
Always have and always will love you Joe. Met you so many times and you were always such a gentleman miss you so much ALWAYS playing your music and yes I cry. Love Always Andrea Buckley X X

Left by Andrea Buckley:
God bless you Joe I am always playing you're music, i am beginning to sing your songs now, which go down well with my friends, when i go into my local, there will never be an entertainer like you ever again in Blackpool where i was born, i now live in Cumbria, I really would like to see one of his shows broadcast for all to see on TV and i am sure that he will get the recognition that he deserves, you're in gods hands now Joe god bless you very much Billy xxx
William James Gillan:
Comment

Left by William James Gillan:
Thank you Joe for all the pleasure you have given us over the years. You cannot be replaced. RIP Joe will miss you.
Susan Elliott:
Comment
Search for another notice
Cheshire
- Cheshire
Search here