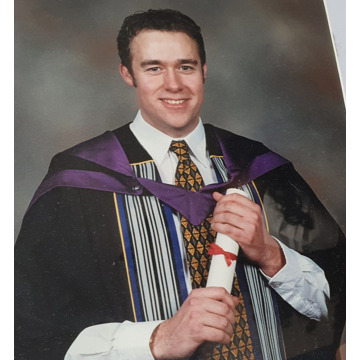 James PringleFRYA software engineer, previous resident of Alnwick, Edinburgh and Chilwell, Nottinghamshire, passed away peacefully 10th July after a long illness. James is survived by his brother Robert, niece Amelia and sister in law Ana. James was born in Harrogate, Yorkshire on 11th August 1972 to Robert Alan Fry (RAF) and Francis Margaret Pringle. He graduated from Heriot Watt University, Edinburgh and then Napier University, Edinburgh gaining Master of Science in Software Engineering. Working as a software engineer for both Marconi Space and Defence Systems and BAE Systems, James worked throughout locations in the UK on both civilian and defence contracts, as well as several overseas locations most memorably, and at the height of career, in Hong Kong where he was attached with the KCR Chinese Railways. James was a keen traveller and in addition to his work travels, toured many countries, some on motorbike, in Europe, North Africa as well as Russia, Far East and Middle East. He had a passion for the Scottish Highlands and Islands where many a day were spent hill walking or climbing. Music played an important part of James's life too and was his social outlet as well as passion. Classically trained on Pianoforte, he continued to play keyboards both privately composing music as well as in bands around southern Scotland. He was a practical man, building his own workshop where many an hour were invested in those special projects. In his latter life and despite increasing difficulties due to his ongoing degenerative illness, he still managed to travel and increasingly indulge in photography of landscape and countryside, intrigued by the changing light the day, weather or seasons brought. James had a great sense of humour and outlook on life, an incredibly clever and remarkable person who lived life to the full and wasted no time even though, it was sadly curtailed by onset of illness. He will be deeply missed by his family, friends and all who knew him. There will be a funeral service for James at 1PM 30th July at St Giles Church, West Bridgford followed by a private burial ceremony at 2PM 4th August at Alnwick Cemetery.
Notify me with new activity on this notice
Enter your email address to recieve a notification for any new activity on this notice.
Register today to set up custom notification and save notice's that are important to you.
Just notify me
Register too
Are you sure you want to turn off notifications on this notice?
Stop notifications
Keep me notified
1750 visitors. Published: 29/07/2021
Want to celebrate a loved one's life?
Create your own everlasting tribute today
You can share James'
notice with your friends & family
One single share can go further than you think
5 Tributes left for James
ROBERT BLACKIE:I worked with James many years ago in Tandy in Edinburgh whe...29/01/2022

Left by funeral-notices.co.uk:
Place Tribute
See all tributes
Leave a tribute for James
Message
Photo
Candle
Finish
Register today to set up custom notification and save notice's that are important to you.
Just leave tribute
Register for free
Change notice background image
5 Tributes left for James
Report a tribute
Leave your own tribute
Leave Tribute
I worked with James many years ago in Tandy in Edinburgh where he worked part time whilst at Edinburgh University, although I hadn't seen him for decades, but still often thought of him and laughed, he was the funniest person I've ever met, even just the look he would give me would have me in stitches, that always brightened up my day, we had many daft nights out in Edinburgh Town where he would always have "Newky broons" and many laughs at his flat in Morningside,
I had no idea he had passed away, I just happened to Google his name as you do, and saw the sad news. I recognised him from his picture right away.
My condolences go to his family and friends Robert Blackie from Edinburgh.
ROBERT BLACKIE:
Comment