The obituary notice of Marguerite OLIVER 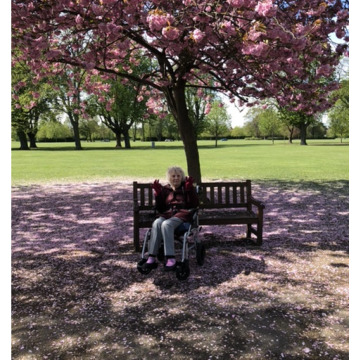 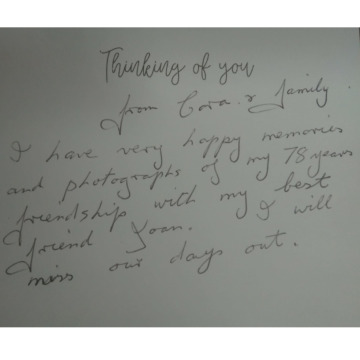 MargueriteOLIVER(Nee Spendlow ) (Joan) Passed away peacefully on the 18th July 2020 aged 89 years. A much loved and devoted partner to Gibby. A loving Mother to Kim, John, Nik and in laws Andrew, Tina and Kerrie. A beloved Grandma to Dani, Frances, Adam, Lily, Lewis and Rio and a great grandmother. A loving Sister to Andrew and the late Colin and Bob. Will be sadly missed by all. Service to take place on Wednesday 5th August at the Chanterland's Crematorium (Large Chapel). Donations may be left at the service for Cancer Research. Resting at John Parkin & Son, 3 Saltshouse Road. Tel. 376104.
Notify me with new activity on this notice
Enter your email address to recieve a notification for any new activity on this notice.
Register today to set up custom notification and save notice's that are important to you.
Just notify me
Register too
Are you sure you want to turn off notifications on this notice?
Stop notifications
Keep me notified
372 visitors. Published: 28/07/2020
Donate in memory of
Marguerite
Donate Now
You can share Marguerite's
notice with your friends & family
One single share can go further than you think
Tributes left for Marguerite

Left by Belinda Darnell:
Place Tribute
See all tributes
Leave a tribute for Marguerite
Message
Photo
Candle
Finish
Register today to set up custom notification and save notice's that are important to you.
Just leave tribute
Register for free
Change notice background image
Tributes left for Marguerite
Report a tribute
Leave your own tribute
Leave Tribute

Left by Wendy Linton:
I have lovely memories of auntie Joan from when my children were small & we used to go to the caravan at Withernsea for the day & have a picnic on the beach. My mum was very close to auntie Joan the sister she never had. I hope she's having a cup of tea with my mum, now & at peace, she was a beautiful lady. All my love and thoughts to the family Vikki, Pete & Lesley xx
Vikki Hall:
Comment
Sympathies posted on behalf of Cora - Joan’s best friend of 78 years. Sharing her fond memories of their days out together.
Cora & Family :
Comment

Left by Cora & Family :
Love you Big Sister! Always fun. Memories of holiday in Italy and you dancing in the Tavernetta and decorating the beach for a Royal wedding! Never missed sending a birthday card always full of glitter that would get everywhere when you opened it. Great memories of you with Bob and Olly. Now reunited with them - only God knows what type of chaos you three are now causing up in heaven! Sleep peacefully.
Andrew Oliver :
Comment

Left by Rio 💜:
Marguerite was to me, Aunty Joan or ‘our Joany’ as Dad called her. We travelled a lot, Dad had a thirst for adventure and having joined the RAF we spent our childhood mostly abroad in various countries, I never really felt like I belonged anywhere, no real roots but there was this one place.
As kids we would sit in the back of a car for what felt like days (probably was) and nearing our destination, no matter what the time or weather, we would see a group huddled together in the street, arms waving and loud cheering, arriving to the best of welcomes anyone could imagine. At the time it was so lovely to feel special and wanted but now, I wonder, how did Joany know what time we were arriving and how long had they all been stood there?
Aunty Joan would wrap us up in her arms and squeeze the air out of our lungs; never had I felt such affection. I was quite in awe of her; she just seemed to exude love, her beautiful red curly hair, the twinkle in her eyes, that mischievous grin and the biggest bosoms I had ever seen.
Our visits were always memorable, sleeping four in a bunk, top to toe, fun as toddlers but not so as we got older with Big John’s feet in your face! Ransacking the toy cupboard, which would avalanche as soon as you opened the door, Joany scolding us for making a mess and laughing as she did. Her meals were like feasts and the best cooked breakfasts you ever did taste. As for upcycling, I reckon Joany invented it, she always had something crafty on the go but it was the gardening she excelled, quirky planting, making tiny spaces feel like a tropical jungle.
Lots of laughter, fun and happiness which continued into our adult infamous Hull trips, they didn’t happen often but were always memorable albeit a bit blurry!
A tribute to my Aunty Joan, a very special lady to me, clever, kind, loving and caring, thank you for all you did for my Dad and for making me feel a sense of belonging. XOX

Left by Belinda Darnell:
Search for another notice
Search here