The obituary notice of Robert MILSOM 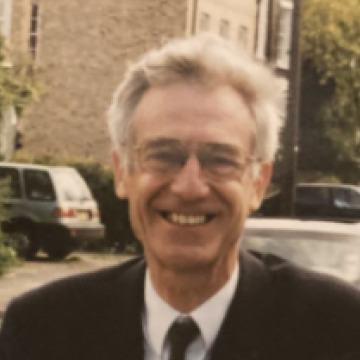 RobertMILSOMWe sadly announce the passing of a beloved husband, father and grandfather. He died peacefully at home on 13th January after enduring several years of Parkinson's Illness. He was an extremely sensitive and kind hearted, loving man who was devoted to his family, work and friends. He worked as a Trade Union Official, a Lecturer and a Solicitor in a career that always involved helping people and making long lasting friendships. He was a great historian and was particularly interested in Oliver Cromwell and the English Civil War. He taught many students right up to the University of 3rd Age a few years ago. He will be forever in our hearts as we remember him with so much love and respect. A joint Funeral for Robert and Paul will take place on Monday 31st January, at 1.30pm at Downing Place United Reformed Church in Cambridge. There will be refreshments immediately after the Service. All welcome. Family and invited friends only will then attend Cambridge Crematorium for 4.30pm. Family flowers only. Donations to Parkinson's Society and Shelter. Those unable to join in person can view the funeral by live stream at youtu.be/RXzlL6-noiw
Notify me with new activity on this notice
Enter your email address to recieve a notification for any new activity on this notice.
Register today to set up custom notification and save notice's that are important to you.
Just notify me
Register too
Are you sure you want to turn off notifications on this notice?
Stop notifications
Keep me notified
2649 visitors. Published: 17/01/2022
Want to celebrate a loved one's life?
Create your own everlasting tribute today
Donate in memory of
Robert
Donate Now
You can share Robert's
notice with your friends & family
One single share can go further than you think
35 Tributes left for Robert

Catherine Hoskyns:Hope you have got Scrabble up there!30/01/2022
Paul Cheshire:Robert Milsom: solicitor, educator and idealist My friend ...30/01/2022

LINDA DE CHENU:26/01/2022
Linda de Chenu:We send our condolences to Penny and her family at the passi...26/01/2022
Place Tribute
See all tributes
Leave a tribute for Robert
Message
Photo
Candle
Finish
Register today to set up custom notification and save notice's that are important to you.
Just leave tribute
Register for free
Change notice background image
35 Tributes left for Robert
Report a tribute
Leave your own tribute
Leave Tribute

Donation left by Jennifer Jacobsberg
Comment
Robert was a really lovely uncle and it is so sad to lose him.

It is comforting to know he died at home with his family to whom he was so obviously totally devoted. Our Love and solidarity to Penny, Tom and Ben and we are comforted by knowing our families continue as close as they always have been and that we shall always remember and cherish those who have passed away.

Robert in his quiet and unobtrusive way was incredibly supportive. For me his genuine interest and enthusiasm for me being in Nicaragua was very significant. He was always keen to hear all about Central America both politically and culturally and would then tell me about the Spanish civil war of which he was incredibly knowledgeable. He also impressed me as he really did have a good grasp of Spanish. His openness and positive attitude to Hispanic culture gave us a lovely link and much to discuss always.

The other great thing we had in common was a love of Football. he took us to the Abbey Stadium to watch Cambridge United which to this day is my second team.

All our love and RIP Robert.

Hope you have got Scrabble up there!
Donation left by Catherine Hoskyns
Comment
Robert Milsom: solicitor, educator and idealist
My friend Robert Milsom died at home in Cambridge on 13 Jan 2022 after ten years of progressively more debilitating Parkinson’s disease. He may have been an MA Cantab but he was very much a part of the town. Working as a legal aid solicitor, defending the poor and outcast – sometimes the seriously criminal too – he was much better known in humble Mill Rd than the ivy courts of college. A short walk – even after he had given up practice – down Mill Rd would see former and grateful clients coming up to talk, give a hug and a thank you.
When my daughter was retraining as a lawyer having become disillusioned with management consultancy and thinking of taking the legal aid path with its vow of poverty, Robert took her on as an intern. He inspired her with a firm belief that everyone has a right to put forward the best defence possible no matter what they are accused of, or how awful the circumstances: a belief she still retains as an inheritance. As he said to her, to do the job you ‘had to have a very strong belief in justice, as a sort of abstract principle’. And principles, especially abstract ones, coupled with enthusiasm for equality and ideas, were Robert’s forte.
He was born in East Anglia and inherited a non-conformist set of values from his mother Mary Elizabeth (Betty) and his father Charles. He also developed a lifelong interest in the radical politics of the 17th Century. After retirement he was teaching a course on Oliver Cromwell – a fellow East Anglian – in the University for the Third Age and from student days was inspired by the Levellers and the radical political movements of the English Revolution.
As a boy his mother steered him to school at Culford, then a direct grant school with a Methodist tradition, near Bury St Edmunds. He did not like it, as he did not like much else about the regimented regime of aspirant public schools. Having excelled academically he got an award to Queens College, Cambridge,
Paul Cheshire:
Comment

I am really sorry for the family. Robert was an intelligent kind and selfless man. I remember numerous things he did for others. He looked after his mother (with Penny’s help) brilliantly when she had Alzheimer’s. He was a good supporter to his brother (my dad) when he was ill, despite being I’ll himself. There are many other kind things he did. May he rest in peace. Love from David,Kay,Oliver and Anneli X
Donation left by David Milsom
Comment

I am very sad to hear of Bob's death. I knew Bob (as we called him then) when we were both tutors at Fircroft College in the 1970s, where Bob's teaching of history was much appreciated by his students. I came to know him as a man of great integrity and generosity. He always had a strong concern for justice, and this led to him being sacked, along with the other teaching staff, because of the Fircroft Dispute. I'm so glad to have known him, and I send my deepest sympathy to Penny and to all Bob's family at this time of great loss.
Donation left by Trevor Blackwell
Comment

May the memories of your beloved Robert and Paul bring you smiles and sunshine again after such a cold and dark January.

With you in your desolation.

Donation left by LINDA DE CHENU
Comment
We send our condolences to Penny and her family at the passing of Robert. We met Robert and Penny through the Queen Ediths Labour Party , meeting them regularly since 2011 , During this time, though suffering from his condition, Robert attended meetings when he was able and, for example , he made sure he attended the 2019 South Cambridgeshire CLP to vote in the Leadership contest.
Although much troubled by his condition Robert participated as much as he could , with Penny and Paul who carried on delivering leaflets and canvassing through the May election last year. Though not able to join these activities Robert was enouraging and supportive whenever we met at his and Penny's house. We pay tribute to Robert , Paul and Penny for supporting the Labour Ward group despite the difficulties of Robert's condition.
Linda and Nick de Chenu
Linda de Chenu:
Comment
Search for another notice
Search here