The obituary notice of STEVEN SWARBRICK 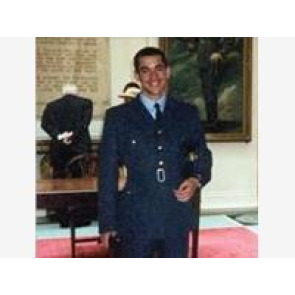 (1) Photos & Videos View all
You can share this
notice with your friends & family
One single share can go further than you think
STEVEN SWARBRICKFlight Lieutenant Steve Swarbrick, who died on 2 September, 2006, aged 28, was a pilot serving in Afghanistan with Royal Air Force Kinloss.Flt Lt Swarbrick, affectionately known as 'Swarbs', was admired by colleagues for the loyalty and commitment he showed his Regiment.He was described by his superiors as an exceptional pilot with the 'world at his feet'.Flt Lt Swarbrick was a keen sports enthusiast, passionate about cricket and a devoted Liverpool Football Club fan. He was an adventurous person who loved outdoor activities and excelled at rock climbing.Flt LtSwarbrick came from Liverpool and was a member of 120 Squadron at RAF Kinloss, based in Moray, Scotland. He deployed to Afghanistan in 2006.On 2 September, 2006, he was taking part in a major offensive against the Taliban near Kandahar when the Nimrod MR2 aircraft he was flying in crashed, killing him and 11 other RAF Kinloss personnel.A soldier, Lance Corporal Oliver Simon Dicketts, and Royal Marine Joseph David Windall, were also killed in the crash.The 37-year-old Nimrod aircraft had just completed a routine air-to-air refuelling and the crew reported a fire on board shortly before the crash.Flt Lt Swarbrick leaves behind his girlfriend Laura Robson, from Inverness, who says her partner had predicted something would happen."He was always complaining about the fact that the flights were always delayed because there were maintenance issues. He was always saying that there was going to be an accident, a serious one."But Foreign Office Minister Kim Howells rejected claims that British aircraft were under-funded and worn out.The incident brought the number of British deaths in Afghanistan to 37. A day of mourning was declared at RAF Kinloss.Station Commander Group Captain Chris Birks expressed his sadness at the tragedy: "I am very deeply saddened about the deaths of 12 air crew from Royal Air Force Kinloss in a Nimrod accident over Afghanistan. All 12 were from Number 120 Squadron based here at Kinloss. All were long serving and experienced air crew."As well as first class personnel these were colleagues and friends of myself and my other personnel. The station is in mourning."Wing Commander Martin Cannard, Officer Commanding 120 Squadron, said: "120 Squadron has suffered a profound loss. We have lost good friends and colleagues, many known personally to us over many years. I have been humbled by the commitment and determination of all of my people to do all that they can for those that have lost loved ones and friends and this will be our sole focus in the coming days."
Notify me with new activity on this notice
Enter your email address to recieve a notification for any new activity on this notice.
Register today to set up custom notification and save notice's that are important to you.
Just notify me
Register too
Are you sure you want to turn off notifications on this notice?
Stop notifications
Keep me notified
1100 visitors. Published: 02/09/2006
Want to celebrate a loved one's life?
Create your own everlasting tribute today
You can share this
notice with your friends & family
One single share can go further than you think
5 Tributes left for

Whatever else we fail to do,
We never fail to think of you.
A last goodbye we did not say,
In our hearts you will always stay
I will always love Steve
Love Shelley
xxxxx

Whatever else we fail to do,
We never fail to think of you.

‘‘Thoughts & prayers we share with you soldier, your families, your friends left behind. We know you have not gone forever, just gone before us. We will meet again.
GOD BLESS YOU - THANK YOU - REST IN PEACE .

For Our Deceased Service Men and Women
You are all-powerful, God, and live forever in light and joy. Look with pity and love, we beg You, on those men and women who bravely fought and gallantly died for their country. By laying down their lives, they showed supreme love for others. Accept, we ask You, their sacrifice and their belief in the justice of the cause they died for. Let their offering not be in vain. Please forgive any sins and faults they may have committed. Speedily, we implore You, bring them into Your Presence where fear, sadness, mourning, and death cannot exist. Have pity in Your loving kindness on those they leave behind. In Your own unsearchable ways, make good for their absence, and lavishly bestow Your love and consolations on those deprived of their presence. This we ask in the Name of Christ, our Victor King. Amen.
"Let us pray for our faithful departed," published Franciscan Mission Assoc.

Sorry it has taken so long. I remember you best as Laura's partner but then I remember you. We had the same taste in books. You were alive and there. I still cannot take in that you are not going to walk thro' the door. Wherever you are - take care