The obituary notice of Terry BLOOD 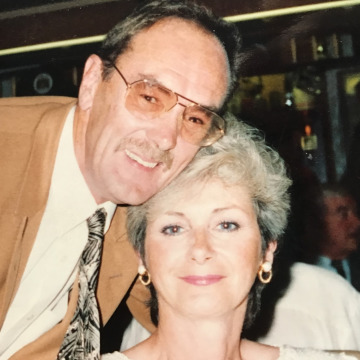 TerryBLOODIt is with enormous sadness that Terry passed away unexpectedly. He had moved to Florida many years ago with his wife Linda who sadly passed away from Parkinson’s two years ago. This year he was planning to come over to Stoke to see his old mates and reminisce about the good old days. He has a daughter Tracey and two grandson’s Matthew and Jack who live in Florida who will miss him dearly. He will be very missed by Pam, his sister-in-law. His eldest daughter Jackie and daughter-in-law Simone have missed the times they should have spent with Terry during the COVID crisis, God bless you Dad. There will be a tribute wall for anyone who wishes to contribute, which will be set up by Monday 25th January at Muller-Thompson Funeral Chapel, Naples, Florida. A service will be held in Naples and a Memorial will be arranged later this year in Stoke.
Notify me with new activity on this notice
Enter your email address to recieve a notification for any new activity on this notice.
Register today to set up custom notification and save notice's that are important to you.
Just notify me
Register too
Are you sure you want to turn off notifications on this notice?
Stop notifications
Keep me notified
2317 visitors. Published: 22/01/2021
Add additional content to this notice
Memorable stories and life events
You can share Terry's
notice with your friends & family
One single share can go further than you think
Tributes left for Terry
David McWilliam:I first met Terry in 1978/79 when I was regional manager for ...18/02/2021
Ann Cecil:I too was saddened to hear of Terry’s passing he ...16/02/2021
Alasdair Ogilvie:So sorry to hear of Terry's passing from Norman Smith Al...16/02/2021
Mick Penning:Had quite a bit to do with Terry for about 18 months; I...10/02/2021
Wendy Austin:So very sad to hear that Terry has passed away. My condole...02/02/2021
Martin Ball: Sad news indeed. I worked for Terry between 1974 and 77...28/01/2021
Elaine Mandley:Saddened to hear of the sudden tragic death of Terry. I wor...27/01/2021

Left by Jane Lymer:
Place Tribute
See all tributes
Leave a tribute for Terry
Message
Photo
Candle
Finish
Register today to set up custom notification and save notice's that are important to you.
Just leave tribute
Register for free
Change notice background image
Tributes left for Terry
Report a tribute
Leave your own tribute
Leave Tribute
I first met Terry in 1978/79 when I was regional manager for Chrysalis and Arista Records. Most of my contact was with Paul Both but Terry got involved over discount and sale or return, surprise surprise! In 1983 he offered me a job as area manager in the video division of the company, I remember he took me to the fist sales meeting in Preston in his Rolls, we went up the M6 like a bat out of hell. I didn't know then that he was selling the final 25% of the company to John Menzies and he left in April 1984. I then worked for Norman and ended up as Sales and Marketing Director of what was then Total Home Entertainment (T.H.E.) Terry had a great sense of humour and did not suffer fools lightly, he was a character that I do not think exists in the business today. Deepest sympathy to his Family.

David McWilliam
David McWilliam:
Comment
I too was saddened to hear of Terry’s passing he was a genuine Gentleman, being way ahead of his time in the music and entertainment industry, well respected with an extremely generous nature.

Having been fortunate to be employed by Terry from 1968 until 1974, I have many fond memories of working in his record shops and in the early days at his entertainment agency, long before he ventured into his record businesses.

Terry Blood Agency offices were located in Broad Street, Hanley with only a handful of people working there it was more like a family.

Terry’s passion for music and live entertainment plus his energy for hard work enabled him to fulfil his early dreams.

R.I.P. Terry and thanks for the memories of the best job ever.

Ann Cecil (Davis)
Ann Cecil:
Comment
So sorry to hear of Terry's passing from Norman Smith
Although I never worked directly with him I recall meeting him at a Midem in the bar of the Martinez when he was with Norman and I was working for Wynd Up
He was great Company and fun to be with
When I worked for Norman after TBD bought Wynd Up he would regale me regularly with tales of Terry and the way he built the business up.
He along with Ray Laren of Lightning and Colin Reilly of Wynd Up really changed the Music Business in the UK
Alasdair Ogilvie:
Comment
Had quite a bit to do with Terry for about 18 months; I'd say from the Spring of '59 to the summer of '60. Drinking mate, though Terry was never a 'proper drinker' as I was.
Record sessions too on Sunday afternoons at his parents' house in Vine St was it, or John St? We were both into American Southern Blues, but whereas he leaned towards R n' B and Rock n' Roll, I favoured New Orleans Jazz. The two genres ran alongside each other -routed in the same social deprivations allied to racism.
Wednesday nights we'd meet up in the Museum pub or Shakespeare as early as 6.30pm in George St Newcastle, -or even the Waterloo a few doors down, which closed in the mid-sixties I think.
We'd have a game or two of skittles, sink a couple of pints and then by 8.30pm, set off across the road to the Crystal Ballroom -'birdin'. Terry always got the best girl on the floor; a right charmer was Terry -good with the ladies. In that regard I more or less 'tagged along' -more in hope than expectation.
On Friday nights, Terry would occasionally 'sit-in' on piano upstairs at the Embassy, adding to the line-up of the Crescent City Stompers, in which I was on banjo. (Not to be confused with the Ceramic City Stompers who held 'top spot' on the 'heaving ground floor')... jammed solid every week.
Good days, finding our youthful way in the world. For Terry the rest is history, he leaving the playing behind and putting all his energy into the commercial side of the business.
It was no surprise when years later I heard he was doing so well, had expanded and was 'making a mint'. No surprise because, whenever, at the end of a gig, when we'd all been invited to attend an 'all-night' party', he, by 1am would have disappeared, not necessarily gone home, but secured a spare bed for the night, locked the door, and at 9am the next morning, whereas the rest of us would be bleary eyed and hung over, he would be as fresh as a daisy -sprucing himself up, immaculately dressed in suit n' tie, -and after a piece of toast and a cuppa -he'd be gone -to work, committed to career, not as the rest of us were still pursing hedonistic satisfaction. Even then at age of 21 he knew where he was going. He was, to put it simply, very ambitious from a much earlier age than the rest of us.. R.I.P. Terry.
Mick Penning:
1
Replies
Comment
So very sad to hear that Terry has passed away. My condolences to the family.
I started working for Terry during my last year at school, picking and packing orders then in buying, I didn't leave for 25 years. TBD/THE was like a family and gave you so many life skills. I have happy and some sad memories but loved every moment. I was amazed when Terry used to walk around the shelves each evening to do his buying and could tell what stock to buy just by eye and touch. We had it so much easier when it went computerised. RIP Terry.
Wendy Austin (Jackson)
Wendy Austin:
Comment
Sad news indeed. I worked for Terry between 1974 and 77 and it was great fun. The one great thing I remember about him, apart from his being an astute businessman, was that he was a lover of the music we were selling too. He had great ears and certainly knew a really good record when he heard one. My condolences to his family.
Martin Ball:
Comment
Saddened to hear of the sudden tragic death of Terry. I worked for him in the 70s and 80s and have many wonderful happy memories . He was so charismatic.
My thoughts are with his family as they cope with this sad loss.
Elaine

Left by Jane Lymer:
Search for another notice
Search here