The obituary notice of COUNTY DOWN POLICE OFFICERS 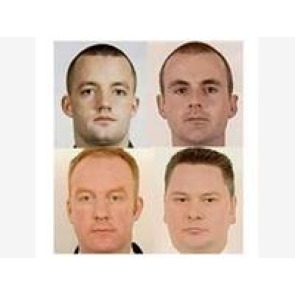 (1) Photos & Videos View all
You can share this
notice with your friends & family
One single share can go further than you think
COUNTY DOWN POLICE OFFICERSRemembering the four police officers who died responding to an emergency call on Sunday 23 November, 2008.They were in a patrol car which crashed in County Down, Northern Ireland.All four were local to the Mourne area. Two were full-time Police Service of Northern Ireland members, while the other two were part-time officers.The officers who died were:Declan Greene,James Magee,Kenny Irvine andKevin Gorman.It was the biggest loss of life in the PSNI since the end of the Troubles.Chief Constable Sir Hugh Orde, said: "The police family have lost four fine police officers in what are deeply tragic circumstances and our heartfelt condolences go out to their families."Our thoughts are with them as they struggle to come to terms with their loss. I know that there are also very many friends and colleagues who are shocked and saddened by this news. These four officers died serving this community and they will be deeply missed."We are extremely appreciative of the work done by the emergency services here last night; and indeed thankful to the community representatives and many members of the public who have passed on their condolences."Assista nt Chief Constable Judith Gillespie, who is responsible for the PSNI’s rural region, said: "Today we mourn the deaths of four police officers, who lost their lives as they supported their colleagues in serving their community. We feel this loss keenly and our thoughts are with the families and friends of those police officers."We think also of those colleagues and friends in the police service who are mourning this loss, and who are continuing to work, delivering a professional policing service at this difficult time. The professionalism of all those officers and staff who have been working in the aftermath of this tragedy is to be commended."We have received many many calls of support and sympathy from the community and for those thoughts we are most grateful. They are very much appreciated."Terry Spence, Chairman of the Northern Ireland Police Federation said: "Two of these officers had children and coming up to Christmas this will be extremely difficult for their extended families but for all of these officers there will be mothers, fathers, brothers, sisters, the police service in general and in particular the colleagues who served with these men so it will be a very very difficult time for everyone involved.'Democratic Unionist Party assembly member for the area Jim Wells said: "Everyone in the Mourne community will know one or other of these men."This will be a dreadful tragedy for the entire community and it will take a long time for people to come to terms with what has happened."
Notify me with new activity on this notice
Enter your email address to recieve a notification for any new activity on this notice.
Register today to set up custom notification and save notice's that are important to you.
Just notify me
Register too
Are you sure you want to turn off notifications on this notice?
Stop notifications
Keep me notified
319 visitors. Published: 24/11/2008
Add additional content to this notice
Memorable stories and life events
You can share this
notice with your friends & family
One single share can go further than you think
7 Tributes left for

County Down police officers
Left by funeral-notices.co.uk:
Brian Kelly:My heart goes out to the families of all those who died i...01/12/2008
Kathy Moffett:My heart goes out to all the families of the 4 men killed, ...26/11/2008
Gemma Cowan:R.I.P guysR.I.P james, u died doing the job u loved. all ...25/11/2008
C M Walbran Ex Raf:After more than 30 years of Troubles in your Land.After Looking ...25/11/2008
Betty Crowe:Our hearts go out to the families of these stricken officers!24/11/2008
Tracey Murphy:R.I.P declan.we had some great craic in the factory and you...24/11/2008
Place Tribute
See all tributes
Leave a tribute for
Message
Photo
Candle
Finish
Register today to set up custom notification and save notice's that are important to you.
Just leave tribute
Register for free
Change notice background image
7 Tributes left for
Report a tribute
Leave your own tribute
Leave Tribute

My heart goes out to the families of all those who died in the crash. May God rest your souls and peace be with those who knew and loved you.
To our brothers who have fallen
Brian Kelly PC 1810 - Cleveland Police, England

R.I.P james, u died doing the job u loved. all my love, mate xxxx all my love to james`s family, i chatted to james regularly and he was a good friend xxxxxxxxxxx

After more than 30 years of Troubles in your Land.
After Looking Death in the eyes So many times.
You all died doing the Job you loved, in the land you loved.
In a time of a Greatly Deserved peace.
My thoughts are with all your Families and Friends
In this time of great SORROW
May you all R.I.P.

Our hearts go out to the families of these stricken officers!

R.I.P declan.
we had some great craic in the factory and you were a gentleman.
ALWAYS REMEMBERED, NEVER FORGOTTEN.