The obituary notice of GEORGE BEST 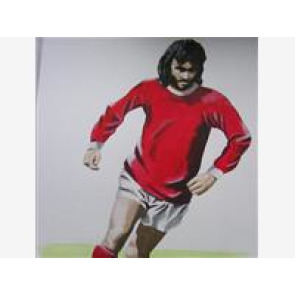 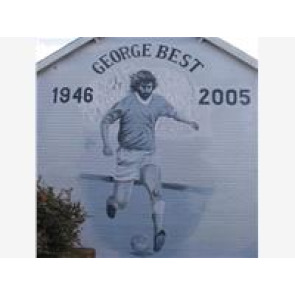 (4) Photos & Videos View all
You can share this
notice with your friends & family
One single share can go further than you think
Potentially Related Notices
Roger George The BEST
Acknowledgements Tue 7th Dec 2010
GEORGE BESTGeorge Best, who died on 25 November, 2005, at the age of 59, was regarded by many as the finest footballer ever to grace British football.Blessed with speed, fantastic dribbling skills, incredible acceleration to get past players and sublime ability with both feet, he was once described by Pele as “the greatest footballer in the world”.During the 'swinging sixties' he also became the first sportsman to transcend the world of sport and celebrity, thanks largely to his good looks and long hair.George Best was born on 22 May, 1946, in Belfast, Northern Ireland, and became obsessed with football from an early age. He was first photographed with a ball at his feet at 14 months, whilst every year he received exactly the same Christmas present - a new ball, kit and boots.Rejected by countless clubs for being too small and thin, he was finally spotted by a scout from Manchester United at the age of 15 and was sent to Manchester to learn his trade under the tutelage of then United manager Matt Busby.After making his debut against West Bromwich Albion in September 1963, he quickly became a regular fixture in a team that went on to win the English league in 1965 and again in 1967, whilst he also made his debut for Northern Ireland at the age of 18 in April 1964.It was on the European stage that he really caught the eye though, particularly after an inspirational performance in which he scored two goals in the first 10 minutes of a 5-1 demolition of a strong Benfica side in the European Cup in 1966.Two years later he again starred as United became the first English club to win the competition, tormenting Benfica for a second time in a 4-1 win at Wembley, leading to his crowning as European footballer of the year in 1968.His lifestyle away from football soon caused unrest at Old Trafford, and after a number of incidents the club sacked him in 1974 at the age of 28. He had made 466 appearances for United, scoring a total of 178 goals, and also won 37 caps - scoring nine goals - for Northern Ireland.He continued to play football, making appearances for 11 clubs, but his finest days as a player were well behind him.In 1998 he was hired by Sky Sports as a football pundit. He also worked successfully as an after-dinner speaker.By 1999years of drinking had taken their toll and he was found to have severe cirrhosis of the liver, resulting in a liver transplant in 2002. Within a year Mr Best was drinking again though, leading to the collapse of his second marriage in 2004.Shortly before his death he requested a picture of him in his hospital bed at London's Cromwell hospital intensive care unit be published in a national newspaper with the message “Don’t die like me”, and four days later he passed away, the cause of death attributed to a lung Infection and multiple organ failure.His mother, Anne, died in 1978 aged 55, and his father Dickie - patron of the George Best Foundation - diedon 16April,2008, aged 88.Fully aware of the role he had played in adding glamour to football, George Best once stated that: "I was the one who took football off the back pages and put it on to page one."
Notify me with new activity on this notice
Enter your email address to recieve a notification for any new activity on this notice.
Register today to set up custom notification and save notice's that are important to you.
Just notify me
Register too
Are you sure you want to turn off notifications on this notice?
Stop notifications
Keep me notified
994 visitors. Published: 25/11/2005
Add additional content to this notice
Memorable stories and life events
You can share this
notice with your friends & family
One single share can go further than you think
12 Tributes left for

George Best
Left by DAVID WYATT:
Karen Hawkins:BEAUTIFUL,GIFTED+ TALENTED......... just the very BEST.....31/01/2009
Mike Cook:FIRST THERE WAS GOD THEN ALONG CAME GEORGE ! BOBBY CHAR...24/01/2009
Ian Herbison:I met George Best in 1974 when he was training with the no...29/12/2008
Maureen Oakley:YOU WERE THE GREATEST FOOTBALLER TO EVER GRACE A FOOTBALL PI...22/12/2008
Martin Spencer:I'll never forget sir matt busbys testimonial.george played ...19/12/2008
Sean Bermingham:I have never seen a player quite like George Best. He is the ...08/10/2008
One of the Greatest Footballers - George Best Tribute
Left by NIk Hewitt:
Place Tribute
See all tributes
Leave a tribute for
Message
Photo
Candle
Finish
Register today to set up custom notification and save notice's that are important to you.
Just leave tribute
Register for free
Change notice background image
12 Tributes left for
Report a tribute
Leave your own tribute
Leave Tribute

FIRST THERE WAS GOD THEN ALONG CAME GEORGE ! BOBBY CHARLTON AND DENNIS LAW ONE EACH SIDE IF I DIE AND GO TO HEAVEN I WON,T SEE A BETTER SIGHT GEORGE WAS A TRUE LEGEND HE WILL NEVER BE FORGOTTEN GOD REST YOUR SOUL GEORGE I HOPE YOU ARE AT PEACE I WILL NEVER FORGET SEEING YOU PLAY BEST PLAYER IN THE WORLD EVER NO DOUBTS !!!!
Whatever else we fail to do,
We never fail to think of you.
A last goodbye we did not say,
In our hearts you will always stay.

I met George Best in 1974 when he was training with the northern ireland squad and watched him play that night, he was a gentleman off the pitch and a genius on it. George you were 'SIMPLY THE BEST'.

YOU WERE THE GREATEST FOOTBALLER TO EVER GRACE A FOOTBALL PITCH,TRULY A LEGEND AND THE LIKES OF WHICH WE WILL NEVER SEE AGAIN, SUCH A NATURAL TALENT, A GENIUS. YOU ARE FOREVER IN MY HEART AND THOUGHTS,GOD BLESS AND KEEP YOU,AND THANK YOU FOR THE MEMORIES

I'll never forget sir matt busbys testimonial.george played in a six a side against man city before the main game.everytime he got the ball their was an air of anticipation around old trafford like i've never heard before.and this was years after he retired in a friendly! god bless george,and we have granted you your last wish,we remember the football.rest in peace.

I have never seen a player quite like George Best. He is the most naturally gifted player the game has ever and will ever see. If there is no such thing as the "complete player" then ask yourself who comes close? George Best enough said.

There are not enough superlatives to describe him just remember this... "Heaven sent and truely blessed the one and only Georgie Best"

Thanks for all the great memories.