Who was Saint George?

Saint George is the patron saint of England. He is also patron saint of Malta & Gozo, Palestine, Portugal, Ethiopia, Turkey, Bulgaria, Canada and many others cities, regions and countries across the globe. He is probably most famous though for slaying a dragon. This story dates back to the Middle Ages when the dragon was used to symbolise evil in its simplest form. The story of Saint George and the dragon is one of the oldest tales of the triumph of good verses evil; kind of like we see in modern day culture in things like the Marvel comic film series. 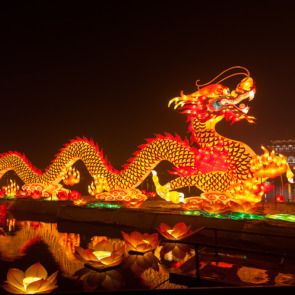 In Chinese culture, the dragon is almost always a source for good
Dragons appear in the mythological history of many ancient civilisations across the world. A dragon 'Y Ddraig Goch' appears on the Welsh national flag to this day and dragons can be seen in modern day Chinese and Japanese festivals.

A dragon is said to be a reptile-like creature and appears in folklore in many different guises. Some dragons are winged and breathe fire, whilst others are wingless and more snake-like in appearance.

According to worldhistory.org, the earliest known depiction of a dragon dates back to 4500-3000 BCE. The Chinese, unlike many other cultures, often depict the dragon in a positive light associated with 'life-giving rains and water sources'. 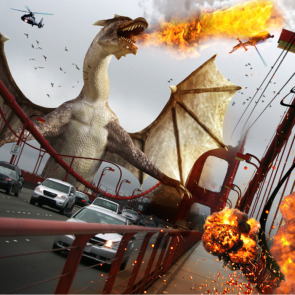 Dragons have featured in many films, books, comics...
My first introduction to a dragon in pop culture was the sweet dragon Elliott in the animated 1977 film 'Pete's Dragon'. Dragons have often featured in fairy tales, comic books, films, books, TV series and video games. Fairy tales are often broken down into stories of good verses evil, so many dragons depicted in these are evil and are defeated by a brave Knight on a trusty horse - much like the legend of Saint George.

Perhaps some of the most famous dragons in recent pop culture are those hatched by Daenerys Targaryen in Game of Thrones. Drogon (the largest of the dragons), Rhaegal and Viserion were used to show the power of the Targaryen bloodline - although Daenerys struggled to tame them and use them only for good. The final battle of Game of Thrones is a slightly twisted idea of good versus evil, perhaps proving that in the pursuit of power, the battle lines become so blurred it is hard to tell which is which.

Speaking of taming dragons, 'How to Train Your Dragon' is a 2010 film that also depicts dragons in a positive light, even though it is the story of a young Viking dragon slayer, good defeats evil as he chooses to befriend his captured dragon and names him 'Toothless'.

There are so many examples of dragons in popular culture it is impossible to name them all. If you ever played 'Dungeons & Dragons' you'll know of many with both good and bad characteristics. Do you have a favourite Dragon in pop culture?
Dragons, like unicorns, mermaids and fairies, will always have a place in our hearts perhaps as they are so entrenched in our history and culture. To slay a mythical dragon is to do something positive - a triumph of good over evil. As today is St. George's Day, perhaps think of something positive to do, slay your own 'dragon' and have a great weekend!

Don't forget to Follow funeral-notices.co.uk on social media to see when new articles are published: