Top 10 Waterfalls to visit in the UK

Share this blog
The UK is home to a large number of beautiful waterfalls, so it was difficult to narrow down to just 10. Waterfalls are one of nature’s wonders, often inspiring feelings of awe and offering some truly beautiful places to visit. If you’re looking for more places to walk, why not go for a walk to a waterfall? Most waterfalls are even more spectacular after rainfall, so don’t let bad weather deter you from visiting.

Here are some of our favourite waterfalls in the UK:

Lightspout Waterfall, Carding Mill Valley, Shropshire
The sound of this waterfall fills the surrounding valley, so you are likely to hear the cascading water before the waterfall comes into view. This walk follows the stream until you reach the waterfall itself, which forces its way through a narrow gap in the rocks.

Aberdulais, Neath Port Talbot
The valley this waterfall resides in was formed around 20,000 years ago by a glacier melting, with the river flowing down the Dulais Valley for 13km before cascading over the Aberdulais waterfall, where it joins the River Neath. This powerful waterfall is even more impressive after heavy rainfall.

Ingleton Waterfall Trail, Yorkshire Dales, England
A walking route in the Yorkshire Dales which features a number of impressive waterfalls, including Thornton Force, a 14m cascade falling over a limestone cliff. The trail follows the rivers to provide stunning views of the waterfalls.

Henrhyd Falls, Brecon Beacons
Found in Brecon Beacons National Park in Wales, Henryd Falls is the tallest waterfall in South Wales at 27m. The water falls over a sheer rock face and into the wooded gorge below, which also offers a haven for wildlife. This waterfall was used in Batman: The Dark Knight Rises as the waterfall protecting the Batcave.

Pistyll Rhaeadr, Powys, Wales
One of the “Seven Wonders of Wales”, Pistyll Rhaeadr Waterfall is one of the largest falls in the UK at 80m high. The area is filled with magic due to the legend of Gwybr of Llanrhaeadr, a winged serpent who lived in the lake at the top of the falls, and would fly down to the local village to steal children, women and animals.

Steall Falls, Glen Nevis, Scotland
Steall Falls is Scotland’s second highest waterfall at 120m, sometimes known as the “Harry Potter Waterfall'' due to its use in the fourth Harry Potter film. The gorge surrounding the waterfall is known for its wildlife and beautiful ancient woodland.

Hardraw Force, Yorkshire Dales, England
Hardraw Force is England’s highest unbroken overground waterfall at 30m high. The fall was used in Robin Hood: Prince of Thieves. To access the waterfall you must pass through the Green Dragon Inn, a perfect place to start your walk.

St. Nectan’s Glen, Cornwall, England
St Nectan’s Glen is an area of woodland featuring a number of waterfalls, including Nectan’s Kieve, an 18m waterfall which has punched a hole through the rocks over time. Some consider this a sacred place, so when you visit you may find various ribbons, crystals and prayers scattered over the rock and foliage near the waterfall. 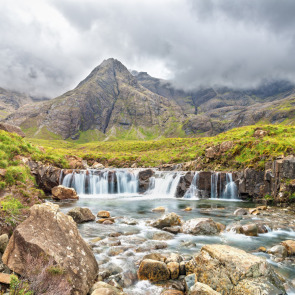 Fairy Pools, Glenbrittle, Isle of Skye
A great spot for walkers and also wild swimmers, the Fairy Pools in the Isle of Skye are filled with magic not just because of their name; the pools are known for their crystal clear water and beautiful waterfalls.

These are just a few of the waterfalls you can visit here in the UK. Hopefully this post has provided some inspiration for your next day out, thank you for reading.