Like millions of others, we were deeply saddened this week by the announcement that Captain Sir Tom Moore had passed away at Bedford Hospital. Aged 100 years Captain Tom, as he was affectionately known, stole our hearts as a national treasure. In this blog we would like to take a moment to talk a little about his life, legacy and the thousands of tributes that have been made to our national treasure Captain Sir Tom Moore.

Who Was Captain Tom Moore

Captain Tom was a much loved father, grandfather, and husband of the late Pamela. Born and raised in Keighley, West Yorkshire, Captain Tom was called up into the army upon the outbreak of the second world war, quickly being placed on an officer training programme, and served in India, Burma and Sumatra.

Described as a national treasure, Captain Tom became a household name in 2020 after committing to raising funds for the NHS during the first lockdown. On 6th April 2020, then aged 99, he began walking laps of his garden hoping to raise £1000 as a thank you to the NHS he loved and praised for treating him for skin cancer, knee replacements and a broken hip.

Prior to his recent celebrity, Captain Moore had appeared on our TV screens in 1983 in a special Christmas edition of the game show 'Blankety Blank'.

Captain Tom completed 100 laps of his garden by 16th April by which time his heroic efforts had been reported by news outlets throughout the world. Seen as a beacon of hope in the midst of a pandemic, Captain Tom was honoured on his 100th birthday with a fly past by the RAF, soon after he was promoted to the rank of Honorary Colonel of the Army Foundation College in Harrogate, followed by a knighthood in July 2020.

Captain Tom will be remembered for his heroic fundraising efforts. Once he had completed his challenge of 100 laps of his garden, he went on to release a cover of 'You'll Never Walk Alone' with Michael Ball and set up a charity in his name The Captain Tom Moore Foundation. To date he has raised £38.9 million, inspired a whole nation and has drawn in admiration from across the world.

His Foundation says:
"We have been working with Captain Tom to create positive impact around causes close to his and the families hearts, from combating loneliness to championing education and equality and of course supporting the incredible NHS carers and frontline workers whom he held in such high regard.

Captain Tom’s actions inspired people across the world and he was extremely honoured that The Foundation might inspire a new generation of Captain Toms. We can all make a difference and through our continued work we will aspire to ensure Tom’s message of hope becomes an enduring legacy."

Their mission is to continue to inspire hope just as Captain Tom did in life; a befitting legacy for a legend.

Tomorrow Will Be A Good Day

A simple sentiment but one that the nation, if not the world, needed to be reminded of in the dark days of the first lockdown. That a man who appeared so physically frail could be so mentally strong was a lesson to us all that we could find the strength and courage to face the next day. Captain Moore's legacy is that message of hope, success against adversity and gratitude; we are now privileged to live in a society where the continuous rollout of a vaccine gives us hope that we can return to some sort of normality. Captain Tom epitomised that hope through his action and his words and it is thanks to people like him that many of us do have the hope of what tomorrow may bring.

Since his family announced that Captain Tom had passed away, we have received thousands of tributes. We would like to share just a few of them with you now that we think capture the spirit of the man and his legacy:

'Rest in peace Sir Tom and thank you for all you have done for our country and the NHS' - Maxine.

'Fly high Sir Captain Tom.
You've reached those gates, but don't be sad, look back at us all and know we feel bad. This time in our world is not so nice, but you showed a nation how to rejoice and again be glad that there was just one man that held our flag.
Now its time to carry on what you started to show the world Britain is always united.
Sadly gone but will never ever be forgotten.' - Gemma.

'To lose a father is the greatest loss of all he was your hero the man you always look up to the man who stood by you from the day you was born. I feel your loss and sadness god bless you all and may his guiding light shine on you all forever x' - Angela.

'The Courage from one man, can inspire a Nation.... indeed, even the World. Sir Tom leaves a glowing light, to shine the way towards mans' kindness to all. - Sheila.

How Can I Donate to Captain Tom's Foundation?

Donations may be made on funeral-notices here: The obituary notice of Captain Sir Tom MOORE or directly to The Captain Tom Moore Foundation.
Captain Tom's stoic, positive attitude has inspired people of all generations. His legacy as a beacon of hope in troubled times will see him remembered always and his charitable foundation will continue to raise money in his name, forever preserving his memory as a selfless hero; a light in the dark during one of the most difficult periods in recent history.

Thousands of tributes have been received for Captain Tom on funeral-notices.co.uk, where we invite you to leave your own tributes to this great man: The obituary notice of Captain Sir Tom MOORE. 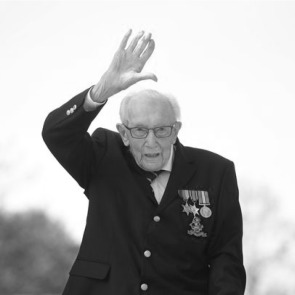 Captain Sir Tom Moore, you were a giant amongst men and stole our hearts. Our nation salutes you, at ease soldier.

May you rest in eternal peace.

Thank you for taking the time to read our blog.

Don't forget to Follow funeral-notices.co.uk on social media to see when new articles are published: