Why do we eat eggs at Easter?

Share this blog
Has it ever crossed your mind when scoffing down those yummy chocolate eggs why it relates to Easter? Here we’ll crack into the history of Easter eggs and how it’s become a tradition – even though most of us haven’t got a clue why.

Why do we celebrate Easter?

Before we look at why eggs are a symbol of Easter we’ll explain why it’s celebrated. On Good Friday Christians believe that Jesus was crucified so they could be forgiven for their sins and on Easter Sunday Jesus resurrected after his crucifixion.

What does an egg symbolise?

You might be thinking what does a delicious chocolate egg have to do with Jesus? Throughout history, eggs have been used to symbolise rebirth and new life – just like Jesus coming back to life on Easter Sunday. The hard outer shell of an egg represents the tomb that Jesus buried in and the cracking of the shell represents Jesus’s victory of defeating death.

The egg also relates to the tradition of Lent

The Easter egg tradition also celebrates the end of Lent. Eggs were originally forbidden during Lent, however, nowadays Lent is normally when you give up something that you enjoy – such as chocolate. Chickens of course do not stop laying eggs during Lent so during this time they were hard-boiled and decorated into colours and patterns and were made into gifts.

So how did we get from normal egg to chocolate egg? 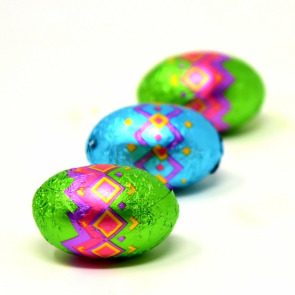 Chocolate pioneers’ seized the opportunity of giving eggs at Easter into a delicious gift. Originally starting from continental Europe which spread to Britain in 1873 where the first chocolate Easter egg was sold.

In 1905 Cadbury introduced Dairy Milk which boosted sales and made the chocolate Easter egg a signature symbol for Easter.

So why do we have the Easter Bunny?

Well similar to the egg symbolising new life, so do bunnies. They symbolise fertility, spring and new life as they produce many litters which are called kittens. Legend has it the Easter Bunny lays, decorates and hides eggs which are why children go Easter egg hunting.

We hope you have a lovely Easter and have hopefully a much more normal spring ahead!

Follow funeral-notices.co.uk on social media to see when new articles are published: